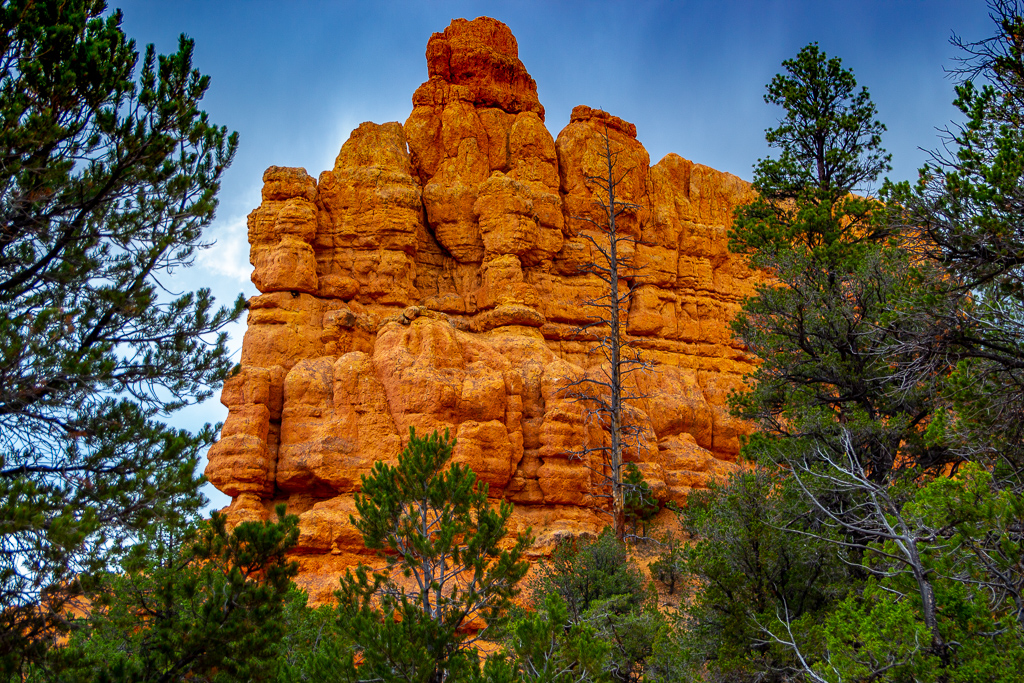 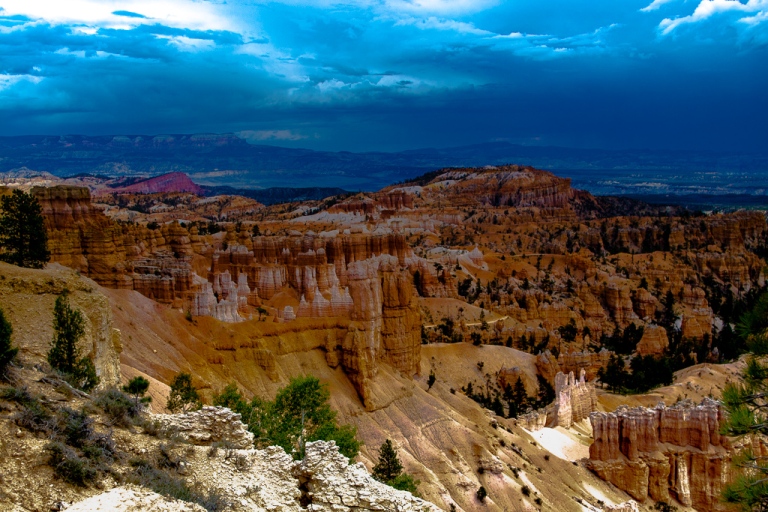 As some of you who follow this blog kind of regularly know, as regularly as I post I guess, Jan and I have two granddaughters who live in Beijing, China. Their Dad, Jan’s son Andy, is a so-called trophy husband who has found his life-calling in photography specializing in underwater shots of everything sub-surface from fish, to microcosm creatures, to underwater wrecks, and most lately mermaids.  Dalice, his wife, is perhaps a little more grounded and works as the head chair in Obstetrics at an international hospital in Beijing. Andy’s passion takes them all over Asia and the girls have grown up exposed to a number of different cultures and languages. They both attend a school in Beijing where classes are held half in Mandarin and half in English. It is an international school through and through, their friends hailing from Italy, India and Indonesia to name a few countries. Elly, more so than E.J., is quite fluent in Mandarin, does improbable homework in Mandarin and can now quite handily hold her own in the swimming pool. E.J.’s first year of school was last year in a kind of entry level Montesori environment. Mom and Dad say that she was fluent in Chinglish but now that she is in the same educational environment as Elly her Mandarin is improving rapidly as is her fervor for life. It had been four years since they were here in the States, long enough to forget a lot of our American culture but eager to learn new things about their country and to meet new people and experience a way of life quite different from their normal routine in China. Three weeks were planned in Utah, starting in the south of Utah at Bryce Canyon, working towards Arches, Canyonlands, Dinosaurland, and on to Park City where Andy grew up.  Family, friends and old classmates were on tap.  Family Vacation! 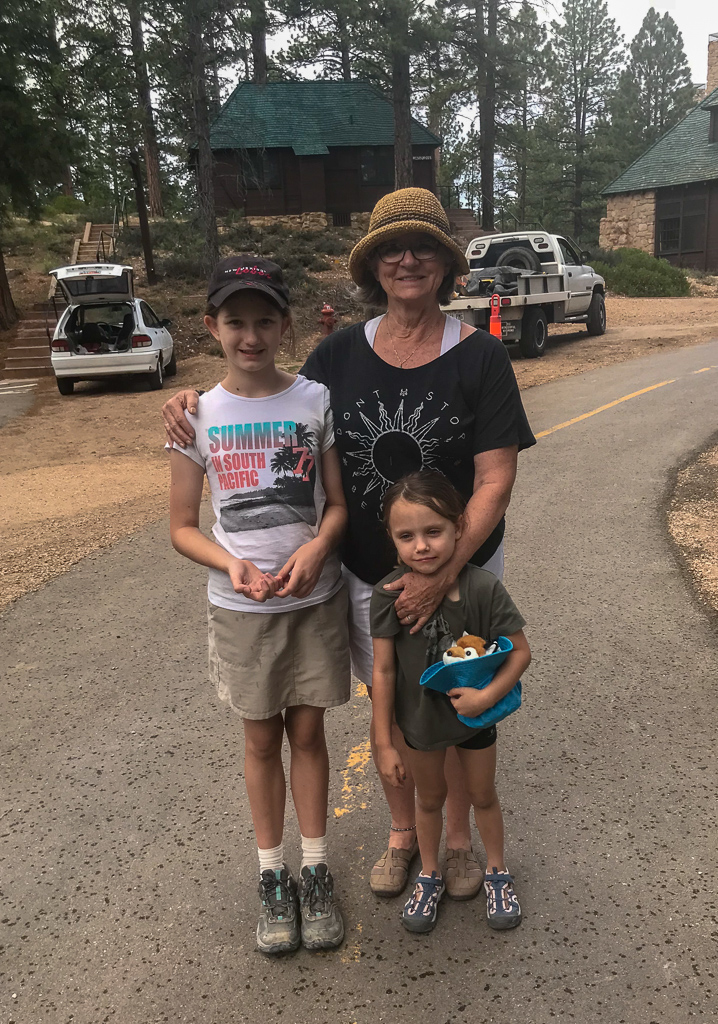 Looks like Jan is choking E.J. No running away from us! And in this next shot I have a grip on E.J. that will prevent her from moving at all. High above the canyon floors I am forcing a smile that belies the terror I feel not only for myself, but for the notion that E.J. is way too close to the precipice which I am trying valiantly, and successfully I might add, to hold up from crumbling into the abyss below. 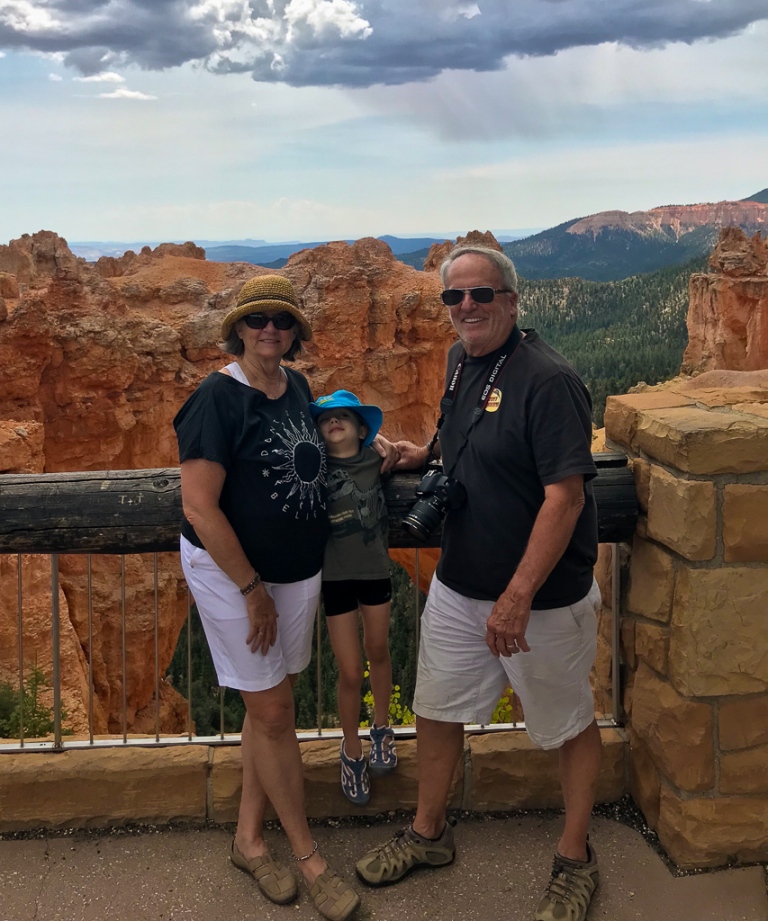 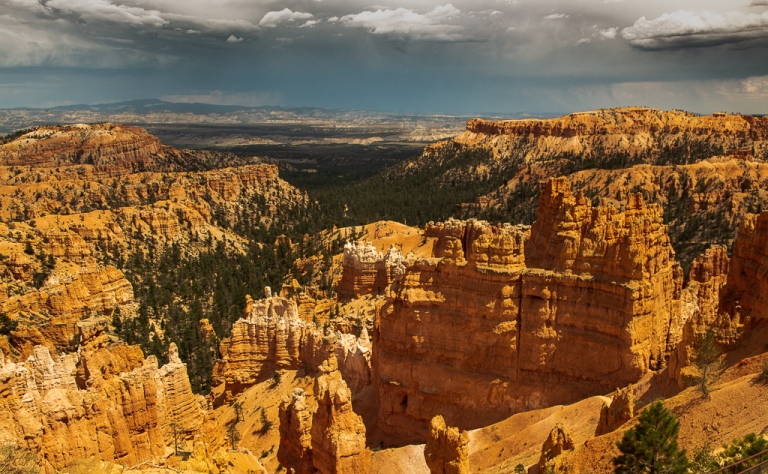 Bryce is a vibrant, living environment. We were there during the fires that consumed the western part of the United States for most of the summer and rarely did we have a blue sky or a starry night. But you could feel the vibe of the canyon anyway, from the majesty of the cliffs, the never-ending columns of hoodoos, the purity of the air and the forces of nature continually shaping and reshaping this mesmerizing place that does not rest. 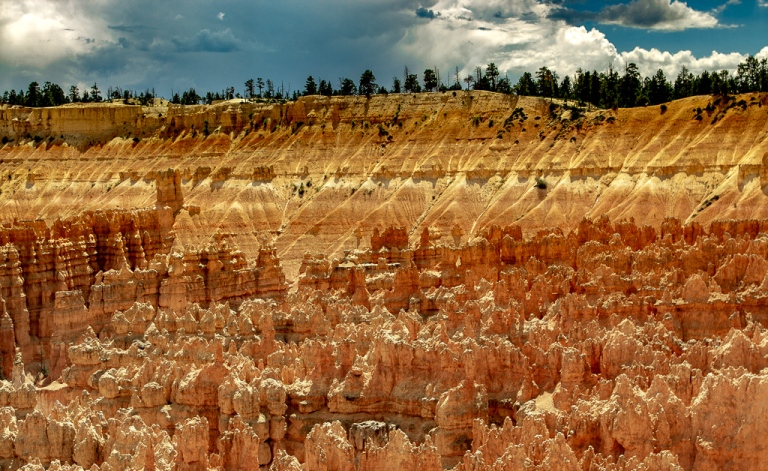 The weather temps in Bryce, or Rice Canyon as E.J. preferred to call it, perhaps hearkening back to her food staple in China, swing wildly during the year, freezing at night and very warm during the day. Many canyons around the country are created mainly by the flow of water and the subsequent erosion of the rock around it. In Bryce, the hoodoos are formed by weathering and erosion in a process called frost-wedging where snow and ice melt during the day and then refreezes at night, expanding and cracking the rocks, or walls around it. Windows are formed, which grow;  the tops of these windows eventually collapse under their own weight, thus forming pillars that eventually transform into the hoodoos. They say at night in this beautiful canyon you can hear the limestone pillars crumbling and falling down to the canyon floor to be replaced by new ones – a never-ending dance of nature. 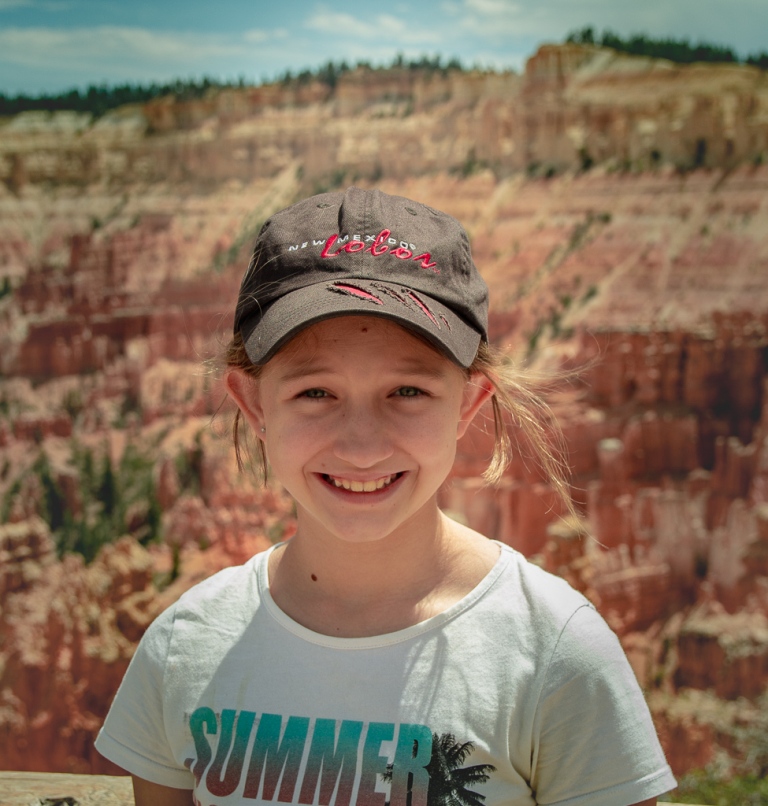 Andy and Elly decided to hike to the bottom of the canyon and then rejoin us on top after an arduous hike through the soaring hoodoos and the searing heat. Elly never complained and I only wish I could like that after a like hike. That won’t happen! There are over 65 miles of trails that start at the overlooks along Bryce’s main road. The views are beautiful and stunning, and the formations are incredible. 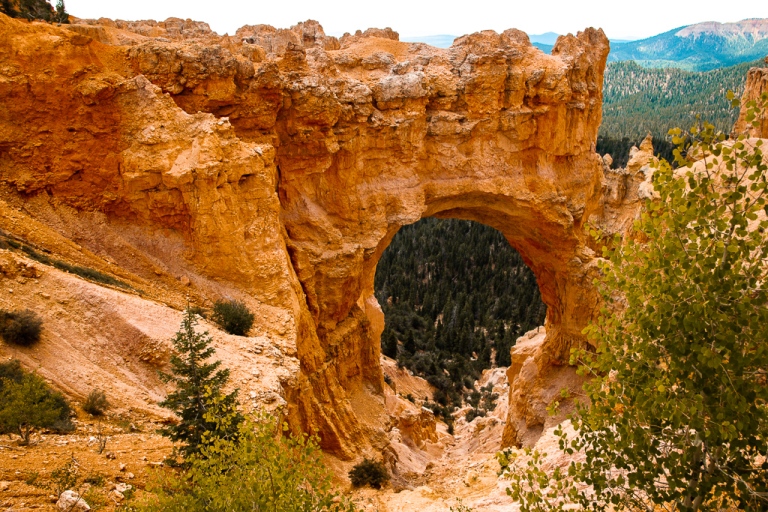 Even on a hazy day the colors were still vibrant, the combination of deep oranges, vibrant greens and the white limestone lending to the awe of the park. 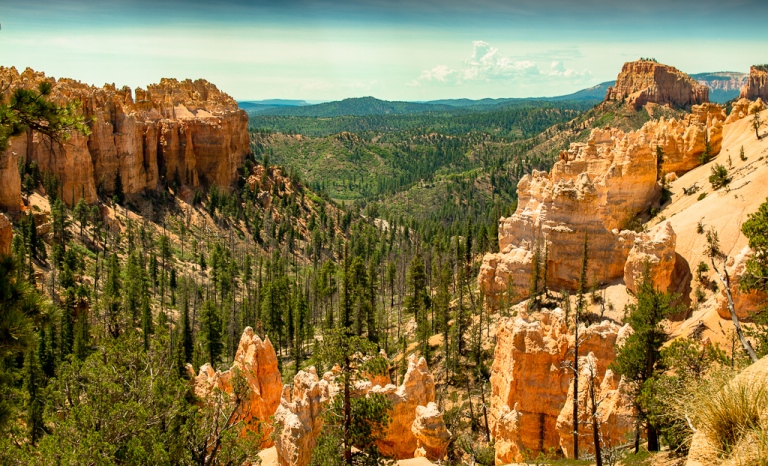 Bryce offers several interpretive programs, ranging from geology to wildlife to astronomy. It was too cloudy and hazy to see a starry night, but it is said that on a cloudless, moonless night the Milky Way looks like “a huge silvery rainbow from horizon to horizon”.  When the moon is out “Dark Rangers” offer night hikes amidst the hoodoos and the canyon walls. Pretty cool stuff. 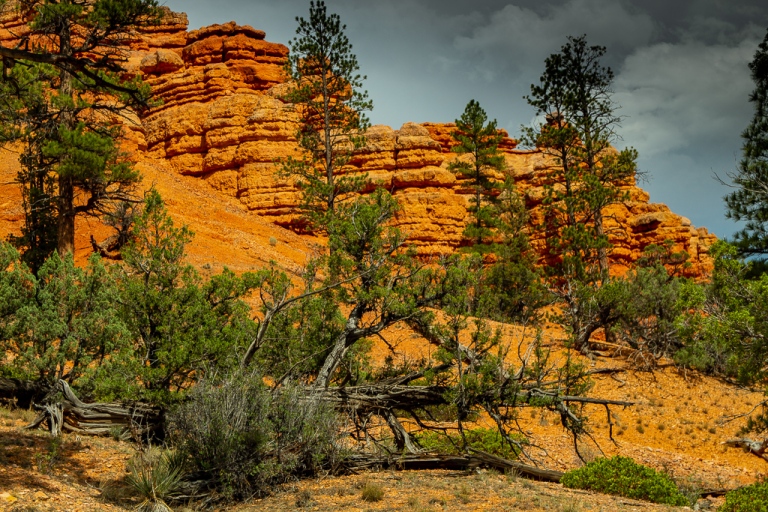 As you motor towards Bryce Canyon Route 12 from the west, you go through Red Canyon, acclaimed as the most photographed place in Utah. Located in the Dixie National Forest and therefore exempt from entry fees, Red Canyon is a stunning assembly of towering hoodoos, red rocks, pink soil, green vegetation and towering ponderosa pines. 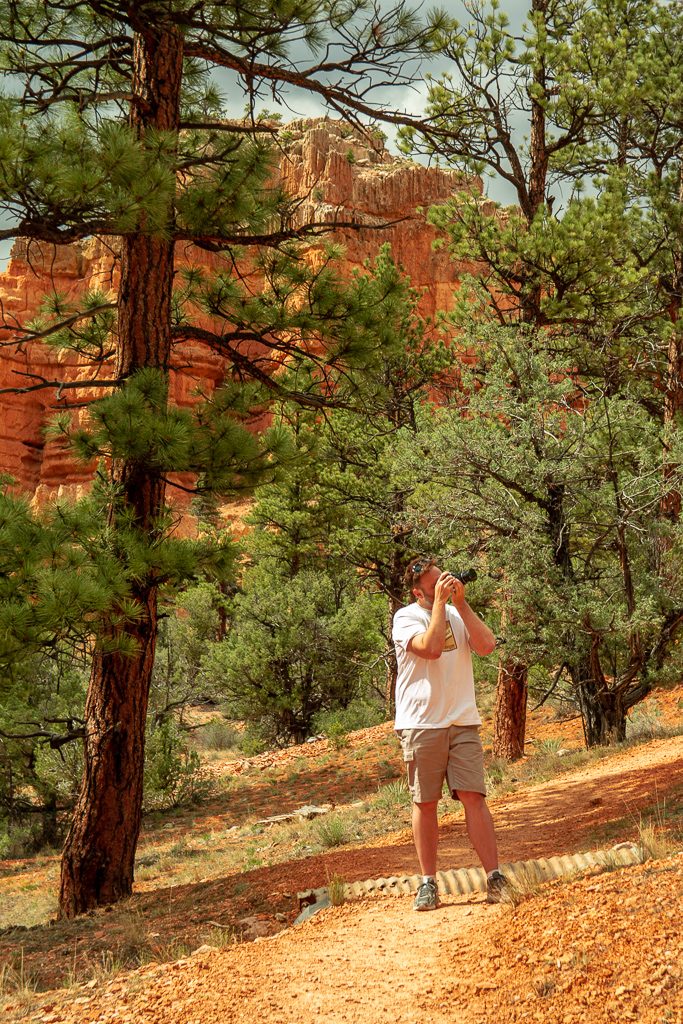 Access from the visitor’s center is easy with a number of trails ranging from easy to moderately difficult allowing you to get up close and personal with the stunning imagery. Butch Cassidy enjoyed the solitude of the area and today ATV’s and horses are allowed on the trails. 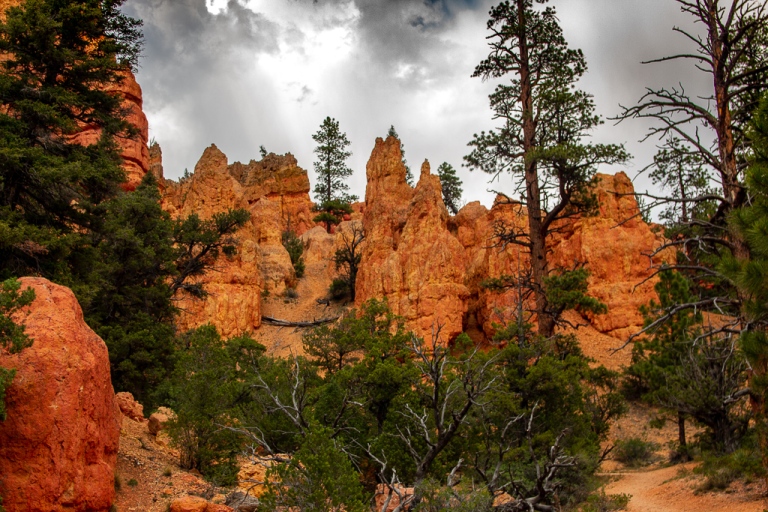 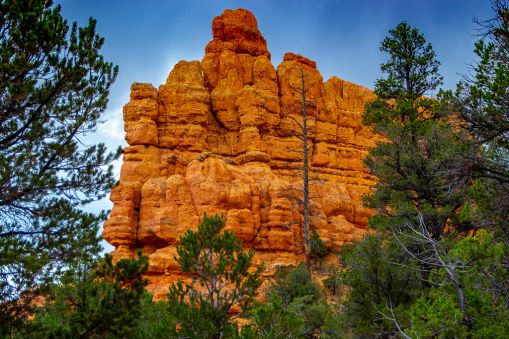 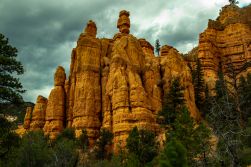 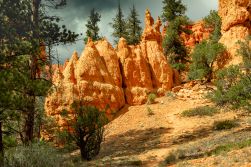 You have to stop there, either on the way to Bryce or on the way back. Our base while in Bryce was the small town of Panguitch, located on Route 89, a two lane road that passes through Panguitch from Richfield to the north on its way to Zion in the south. There is a crossroads in town where Route 12 crosses 89 – to the west you wind your way through Dixie National Forest to Cedar Breaks National Monument, a natural amphitheater carved out of the cliffs, deep and majestic, without the hoodoos of its neighbor to the east but nevertheless equally as inspiring as its more well known fellow National Parks. 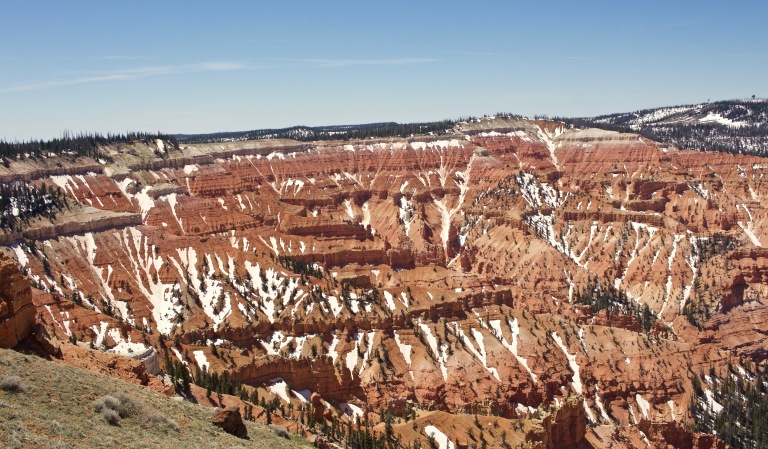 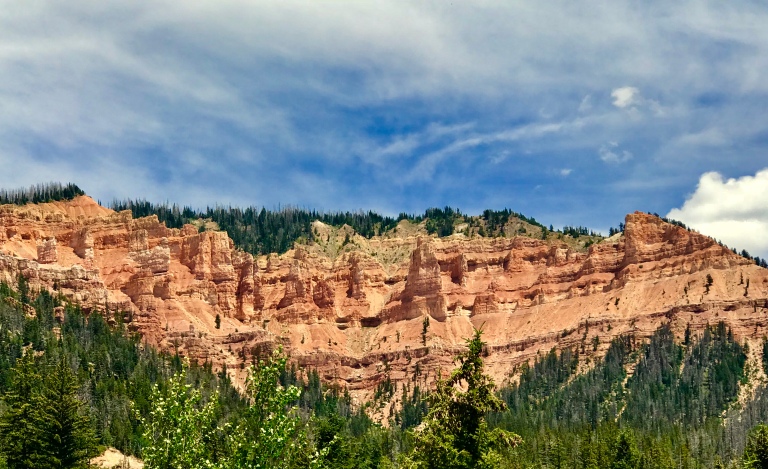 To the east is of course Bryce and Red Canyon, to the south is Zion’s, but right there in the center of town, at the crossroads of it all, you will see this. 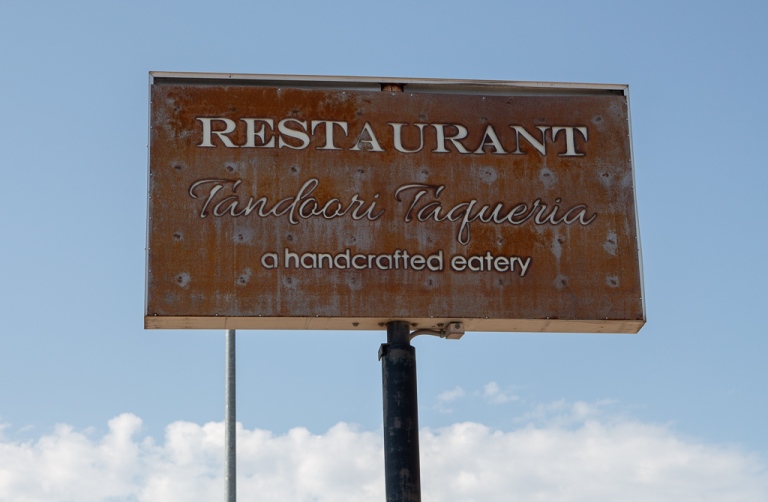 Hello?!! A fusion of Indian and Mexican in a town of 1500 in southwestern Utah? Dare we try it? 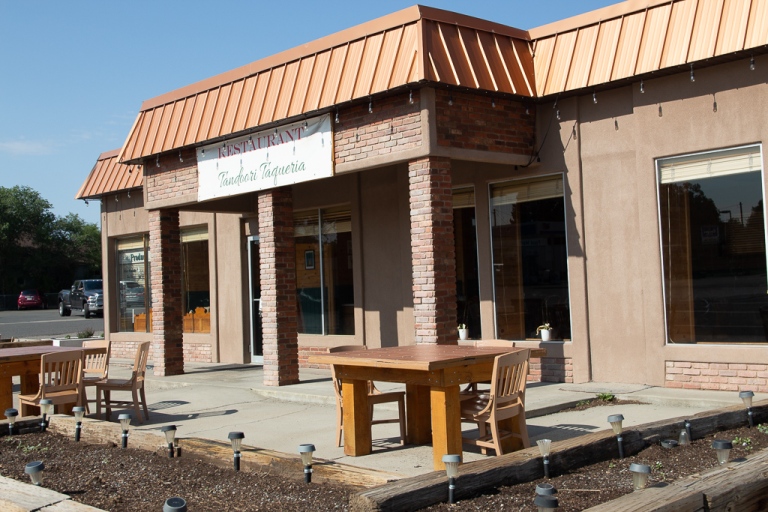 To me, a confessed foodie groupie junkie, this either had to be unbelievably unique and great or the biggest waste of time. We found out and it didn’t disappoint. 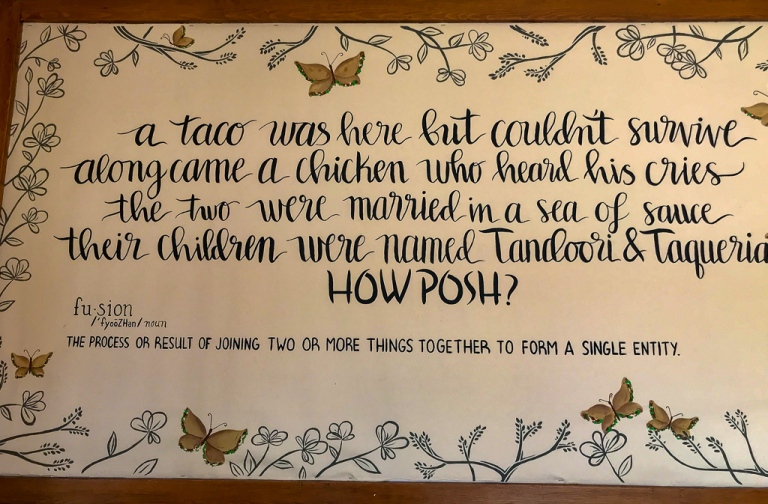 The restaurant is owned by a young Indian lady, who to add to the mystery, charm and uniqueness of the place is married to a Romanian engineer, and who came to this country when her parents emigrated from India. They moved from city to city and eventually ended up in Panguitch where they bought a motel on the outskirts of town. Ripple Desai (the young lady’s name) grew up in Panguitch, obviously not of the same lineage as her classmates, many of whom were true Utahns, and by the force of her personality managed to overcome most any discrimination that might have come her way. I don’t remember if her only sibling was older or younger, but both found their way to university in Salt Lake. Her sister was, is, a bookworm and I believe she is a chemist, perhaps a physicist, but very bookish. Ripple not so much and when her father (a great story) bought the property on the corner of Route 89 and Route 12, right there at the crossroads to some of the greatest scenery on earth, Ripple came back to Panguitch and asked her father to build her a restaurant. Of course he agreed to and asked her what kind she was going to open. Growing up, her mother would ask her every day before school what she wanted for dinner and every day Ripple would tell her Tacos. As native as you could get in this part of the world Ripple grew up loving tacos and of course her native food. How hard would it be to blend the two cultures, the cuisines and the mystiques of two completely different countries. As it turns out, it is a lot of work but oh my gosh the results are unbelievable. 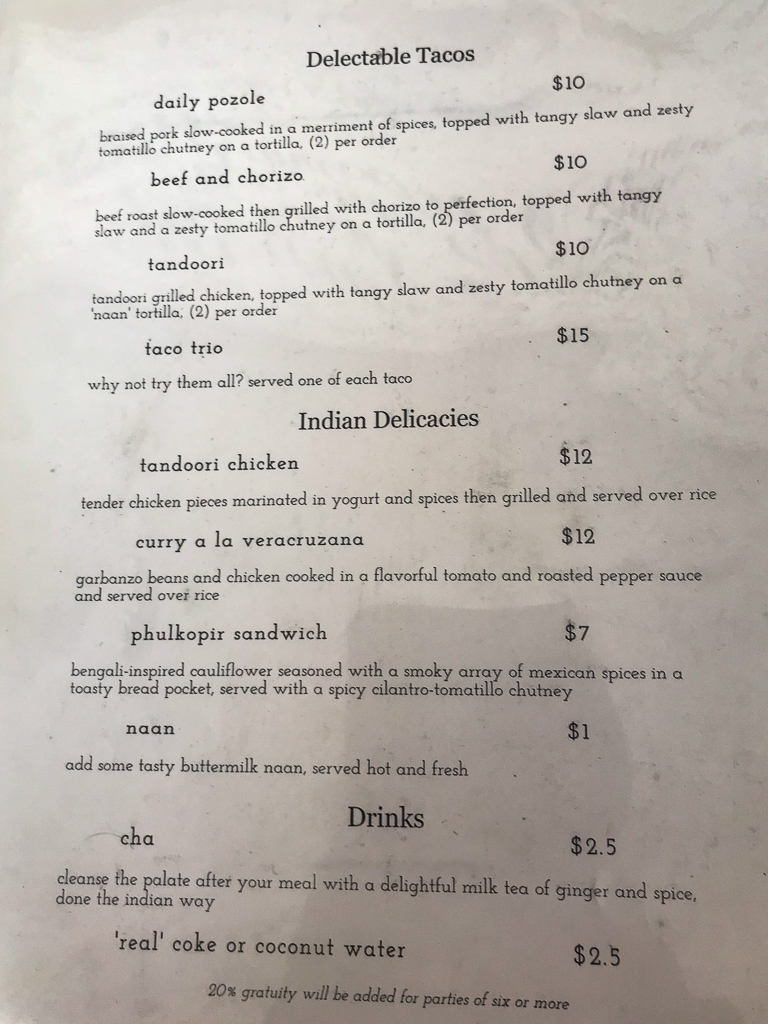 Everything in every dish is organically grown in her mother’s garden with the exception of the meats which are purchased locally and therefore by definition have to be good. Right. I mean, there is nothing to find fault with in this restaurant. I had the taco trio, a blast to ones senses of flavors that you would not normally consider blending together. The tangy slaw, found in all the tacos, is white cabbage mixed with cilantro, mint, garlic scapes,  beet greens, mustard greens, everything green and then tossed with a dressing of chipotle and garam masala, milk, white vinegar, salt, pepper, sugar and a couple more secret ingredients. Unbelievable .

Andy did an interview with Ripple and she was as open and genuine, as passionate  and caring as you could want. If the interview is ever published I’ll put it here.  And f you are ever there in Panguitch check out Tandoori Taqueria. You will not be disappointed.