I’ve been messing around with the blog layout and also trying to figure out how to upload recipes so that our readers can download them if they want to. Not sure I’ve accomplished that but I added one recipe to the last blog and I’ll try another one here…

By the time Bob and his brother arrived for dinner the inside of the coach had gone down to 92º, not an optimum temperature for four adults to gather around a small table and try to eat dinner. The shrimp cocktail was a hit but the coach didn’t cool down as I was going in and out to cook the steaks. Gawd, this was turning out to be torture. By the time i got the steaks on the table I was pouring sweat, I punted on the asparagus and hoped that everyone else was as uncomfortable as I. Well, maybe they were but they didn’t show it. There we were, shoulder to shoulder, arm to arm, heat radiating from every pore and sweat poring from every gland. And – it turns out that Bob’s brother Ernie can be a talker. It was the first time we had met him, and he is a super nice guy, but he talked and talked as we got hotter and hotter, it not seeming to faze him since he lives in that area, but getting to our very souls. Mercifully it was time for dessert, a lemon cake I had made at home. Delicious.

Finally Bob and his brother made their farewells and were off into the desert heat. We cleaned up the coach and decided to go for a walk and explore the resort. We had read that it had a golf course and we had brought our clubs but it was walking only so we decided to keep the clubs shelved. We had a beachfront location with a private little sandy area and we decided that on Sunday we would spend the day in or near the water. All day! 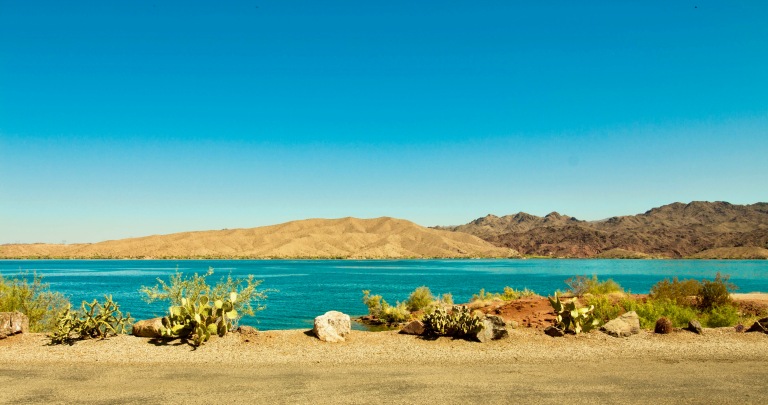 We also decided that we wouldn’t cook dinner in the coach, a marinated pork tenderloin that had been soaking for a couple of days, but that we would eat at the little restaurant on the grounds and save the cool that was starting to permeate the motorhome. 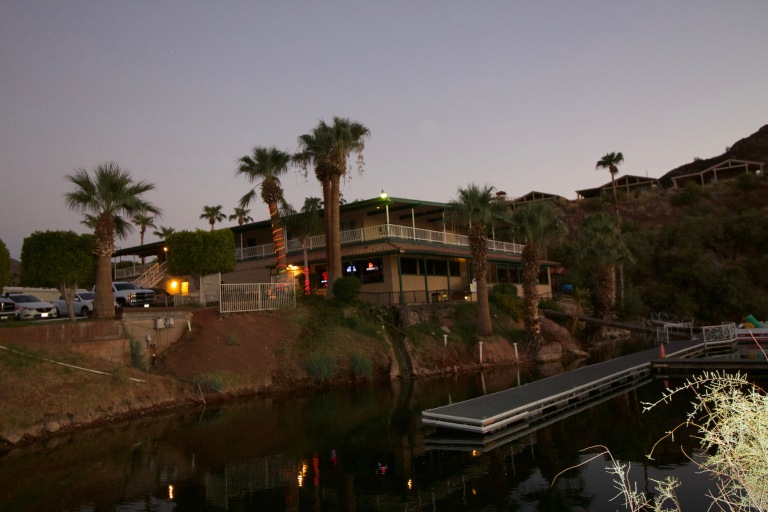 Monday shined hot and bright and we left around 9:30. I plugged the storage area’s coordinates into my navigation and we ended up on CA 62 – a two lane road about 20 miles north of I-10 that ran parallel to it. It’s a stretch of 110 miles from Parker to Twenty Nine Palms highlighted by a 17 mile section of the road famous for its rock graffiti that adorns the sidebars of the railroad tracks. It also boasts a shoe tree and a wild and crazy sign post. 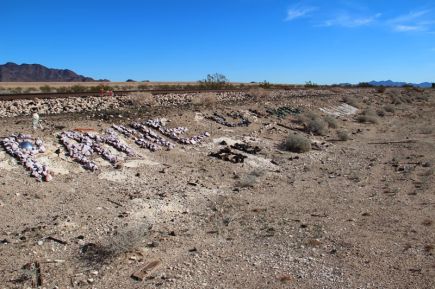 For most of the road it was desolate, an occasional duet of cyclists (!!!) a few trucks coming at us and a lone hiker going the other way, shirtless with a backpack on and water bottle at his side – where he was going and where he had come from was a source of conjecture for us for the next couple of hours.

This drive was a small tease as to what we could expect over the next several years – roads with unexpected and little heard of attractions, memories that will be seared into our brains for quite a while.

And finally, we arrived again to I-10 where we made our first stop at a Flying J service station. Folks, I’m telling ya, we felt we had achieved nirvana, we were soul brother and sister with the community of gypsies that crisscross the roads and paths of this country, some on a mission and others merely temporary visitors to a certain place in time. Yeah – there we were parked next to the big boys, chowing down a forgettable sandwich and swatting a few flies that had crept into our world.

This is going to be fun! 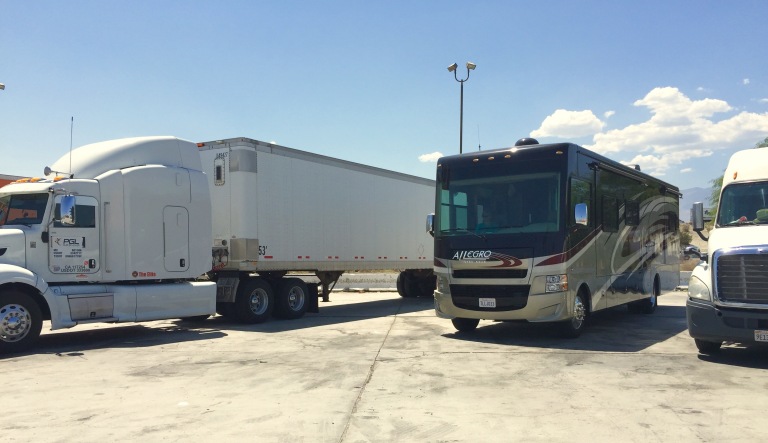 One Reply to “Shakedown cruise #2 part 3”