They say you can never go back and that old adage pretty well holds true. We have never had any intention of moving back to Park City but we were curious to see the town where our kids had grown up, taken first communion, got their drivers licenses (well one of ‘em did, the other others drove around illegally) and graduated from high school. It’s really cool that they are still in touch with many of their classmates, some of whom became Olympians and many of whom still live in Park City, or in the general area. Jake Hanley is one of those, a kid who went to school with Josh and Andy and is now some twenty years later the head professional at The Jeremy, Park City’s featured golf resort. It is easy to understand why some never want to leave the area.

We had four favorite restaurants there: The Grappa, The Claimjumper, Alex’s and Szechwan. Josh worked at Szechwan from when he was still in Middle School through graduation from High School, Jake would help out there as well, Rob worked The Claimjumper one summer and Andy worked at the Samsonite store at the outlet mall.

The Grappa was located in what was an old hotel at the top of historic Main Street and which was the last stop on the infamous pub crawl that would start at the bottom of Main Street, hit almost every bar on the “street” and end at the bar in the old hotel which I believe was then called The Blue Onion. The floor of the bar was on an angle and even in our drunken states you could tell that the old building had settled. In Utah, the waitresses and waiters had to wear name badges with numbers on them, and the girl who was usually there was Deb ’69, a big woman with an even bigger dog that could leap the bar counter if so urged and scare the living “shit” out of you if you weren’t prepared. Fun times. Bill White would become one of Park City’s emerging chef-owners and his first venture was a Tuscan-style restaurant called The Grappa. Lots of nooks and crannies, romantic alcoves, lighting and great food. If you are ever there it is a must-stop.

The Claimjumper was an authentic old-style western steakhouse. Pretty simple menu – meat (the famous baseball steak and the best Prime Rib), baked potato, a great salad and wine in a room with a see-through kitchen. There was also trout, Alaskan King Crab and chicken for the meat-conscious folks and everybody loved the mud pie for dessert. Overflow crowds would eat in The Down Under, a truly dim room below the main floor with a long western-style bar and tables and accessible from the street. There was live music on the weekends and lots of hooting and hollering, and drinking. As a matter of fact, there was a lot of drinking all over Park City despite the obvious Mormon presence. An oasis in a desert of white. I had my offices on the top floor of The Claimjumper that had also been a hotel back in the day and was then converted to offices, and during the winter, and on particularly good snow days, I could leave the office, hop the Old Town Lift Chair and be skiing in ten minutes. Most days I would make it back for some more work. Alas the building is deserted now, kind of an eyesore on a very pretty Main street, but still a reminder of good times gone by. 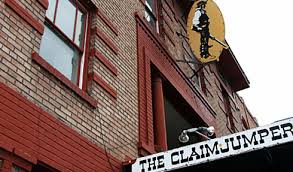 Alex’s obviously was named for Alex whose last name I cannot remember. He and his wife Mireille set up shop in a small space on lower Main street that was accessible both from Main Street and from Swede Alley. His menus were always creative, the food always fresh and we became quite good friends once we found that we could converse in a couple of different languages. Over the years Alex opened several other restaurants, including the Goldener Hirsch in Deer Valley and a lease arrangement with The Snowed Inn out on Route 240. Both of these restaurants were a little out of Alex’s element, one being German and the other kind of American-leaning cuisine and while Alex brought his flair and cooking expertise to both places they really never caught on and he would retreat to Alex’s once more. On any given night you would find Hollywood celebrities there and it was to everyone’s delight that he was back on Main Street. I don’t know where Alex is these days, but his restaurant is now a shabbu place. Yup. You can’t go back.

But, there is the Szechwan, an authentic Sichuan-style restaurant that was located half-way up Main Street and which blows up the theory you can’t go back. We found it right after we moved to Park City and became very close friends with the owners Wendy and Jeff. Not easy to be accepted into the Asian culture – as hard as one tries there is always that one last barrier that is hard to break down to understand another’s culture and heritage. Perhaps because I had lived in many parts of the world it happened, but it doesn’t matter because it became a great relationship. Jeff was a nut case – if you looked in the dictionary under OCD you would find his name. He and Wendy were part of a group that would sponsor “chefs” from China who were brought to Los Angeles and then farmed out to different areas in the States to cook authentic Chinese food, whether it be Szechuan, Mandarin or Hunan. The owners like Jeff and Wendy would put them up in dormitory-style quarters above the restaurant and their life consisted mainly of cooking. Their stints would typically last 6 months before they were rotated out although it did happen that a particularly good one could stay for a year.

Jeff and Wendy didn’t make it in their marriage and in a kind of bounce-back kind of a happenstance Wendy took up with and married Paul, a legit rocket scientist from LA who unfortunately had a sizable and for the most part successful gambling habit and thus did not hold jobs for very long. He and Wendy got married and had a beautiful daughter who has to be at least in her early twenties by now. If you were to look up Paul in the dictionary you would find a link to the top 20 dentists in the world for as nice and smart as Paul was, he had the worst set of teeth of anyone living, whether in Asia or America. Jeff also had a bounce back relationship, married a Chinese girl, name forgotten, and opened up a Chinese restaurant directly across the street from Szechwan. Josh worked the Szechwan and Jake briefly worked with Jeff but it wasn’t long before he couldn’t take his looniness any more. Jeff didn’t make it and where he and his wife are today I have no idea, but Wendy opened up a branch at the Junction and then closed the one on Main Street to concentrate on the Junction. Her marriage to Paul ended as well but nothing suffered on the restaurant side and the food was as good as ever when Jan and I went there. Wendy is truly a great lady and I really believe she has the most authentic Szechuan cuisine in the States. But I am biased. Wendy and her two daughters.

There were plenty of other good restaurants in Park City, and many more new ones have opened since we left. Many three star restaurants with renowned chefs and a variety of cuisines. That is all integral to the infrastructure of a successful resort town.  Park City, and to a little less extent Salt Lake City, has accomplished that to the Nth degree. Check out  Wendy’s place @ www.szechwanpc.flavorpot.com

2 Replies to “Park City Then and Now”