Heading west out of Kirtland, you can see the mammoth rock formation known as Shiprock and which is where the town of Shiprock is located. Now, we had been in the area for probably four days and I could not for the life of me make out the form of a ship and there are a few others who lack this vision as well. I must say we are a minority, but the rock formation is very imposing the closer you get to it and it is one of the most photographed icons in the Southwest.

My niece Wendy, her husband Steve and their two kids lived in Shiprock for a while, then moved on to Durango. Wendy and Steve are both in the medical field, and their home in Durango is beautiful. We spent a day with them, catching up on old times, memories and family and spent the better part of the afternoon wandering through Durango, a picturesque mountain town in the San Juan Mountain range in Southern Colorado. What makes Durango a little different from other boom ski towns of the west is that the citizens have resisted the temptations that have entrapped towns like Vail, Aspen and Park City. It has maintained its identity through the years and is truly an artistic community with a heavy emphasis on the natural environment that surrounds it. Hiking, skiing, snowshoeing, rafting are all outdoor activities at one’s fingertips. A great place to live. 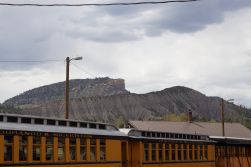 Passing through Shiprock we headed on to the Four Corners area, an obligatory stop if one is in the area, although Steve, Wendy’s husband, who works in Red Mesa Arizona, a one and a half hour commute from Durango, has never stopped there in ten years of making the commute. Well, we have our i-phones and Canon so we stopped, paid the ten dollars to the Indians and took the pictures that everyone else does.

There is a landmark here at the single place in the United States where four states come together; Arizona, Utah, Colorado and New Mexico. But, it is also where the history of the “Ancient Ones” begins, and the Anasazi Indians who are descended from the 7000 year old culture and who lived in this area from the first century to the thirteenth. They began as basketmakers and lived in the open near the fields they harvested, eventually turning their skills to pottery making and ultimately leaving the Four Corners area for new lands.

Which took us to Mesa Verde, another national park and since 1978 a World Heritage site. Designated in 1906 as a National Park, it was charged with preserving the artifacts and archeological heritage found in the mesas and the cliff dwellings of the Ancestral Pueblo people around Mesa Verde, “green table” In Spanish and so named for the piñon and juniper forests found there

Original dwellings were called pithouses, shallow structures built underground and covered with poles and mud. Entry was through the roof. Through the centuries the desire to have larger and more accessible dwellings led to expansion upward and eventually to the more modern pueblos. By the middle of the eighth century, when the Pueblo period began, the pithouses had become Kivas, the largely ceremonial areas integral to life in the pueblos.

By the 1200’s, the Ancestral Pueblo people had begun to turn to the land below the mesa, underneath the overhangs of the cliffs, areas that were excavated and where numerous cliff dwellings were built. This was where their ancestors had started as far back as 300 AD and the land was either rebuilt or new dwellings were built.  Some had just one room, and some had over 150. These dwellings are so impressive, and it remains a mystery as to why the people moved on after only 100 years or so of living there. One day of exploring does not do Mesa Verde justice; the history of subsequent generations of these people throughout the Southwest finds its basis here and in the Four Corners area. 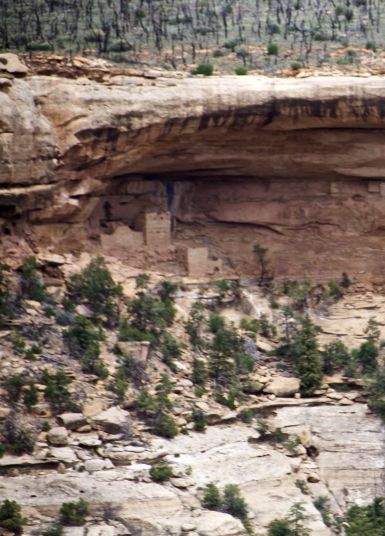 I love lamb – especially grilled lamb. I’ve made it with a little too much oil in the marinade and torched a grill – literally melted most of it to a charred hulk and I’ve made it to perfection. Always a crowd favorite. This recipe comes from a website called serious eats and is simple but elegant. Crying Tiger Lamb suggests the recipe will bring tears to one’s eyes because of the chiles, but you can tone it down by reducing the number of chiles  you use. Enjoy!