We started the day out with mimosas (it WAS Mothers’ Day) and some steel cut oatmeal and then headed out to Chimayó and Taos.

Chimayó is located some 25 miles north of Santa Fe and was where Andy and Dalice had their rehearsal dinner 15 years ago. It is also the site of the El Santuario de Chimayó, internationally known as a healing place, much like Lourdes in France, and visitors number over 300,00 people annually, especially at Easter when over 30,000 faithful make the march or pilgrimage, some from as far away as Albuquerque. Chimayó is the most visited pilgrimage center in the United States and while not confirming that miracles have taken place, the church does acknowledge the existence of there claims. Some come looking for cures, traditionally rubbing themselves with dirt taken from the nearby hills, and others seeking guidance and fulfillment. 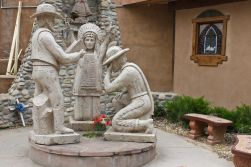 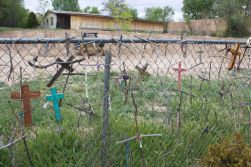 The Rancho de Chimayó where Andy and Dalliance had their rehearsal dinner, was founded 50 years ago and is well known for its signature dishes of spicy guacamole, hand rolled tamales, blue corn enchiladas, carne adovada and chile rellenos. The varietal red chiles are found right in Chimayó and after we visited Taos we came back to Rancho de Chimayó for dinner. Despite an uninterested waiter, the meal was delicious and the margaritas were outstanding.

Taos is located in the northern part of New Mexico and is a designated UNESCO World Heritage Site. It traces its history back to prehistoric times (3000 BC) and the Anasazi Indians that originated in the Four Corners area. The migration of these Native Americans is well documented and the descendant Tiwa Indians have lived here in Taos for over 1000 years. A major settlement that thrived as a major trading post between the Rio Grande pueblos and the plains indians, Taos Pueblo today still is home to some 150 people.

The entire pueblo is made completely of adobe – a combination of earth mixed with straw and water, and then either poured into forms or made into sun-dried bricks to build walls that are often several feet thick. The roofs, some of which are five stories high, are made from poles and then packed with loose dirt and the support for the building comes from timbers gathered from the forests in the neighboring Sangre de Cristo mountains.

A creek, Red Willow Creek, runs through the middle of the pueblo, its origin being high in the mountains at the sacred Blue Lake, and which becomes whitewater further downriver before joining up with the Rio Grande. 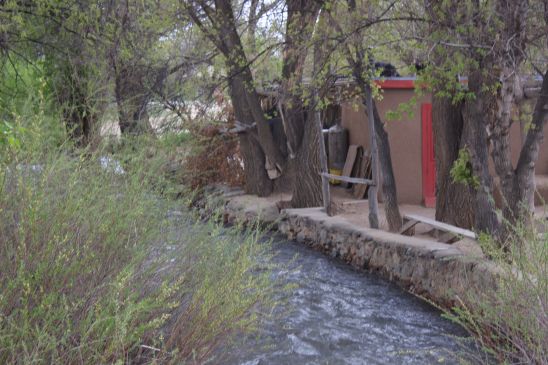 There are shops, mostly handcrafted jewelry and woven blankets, and the usual array of tee shirt and knick-knack shops. 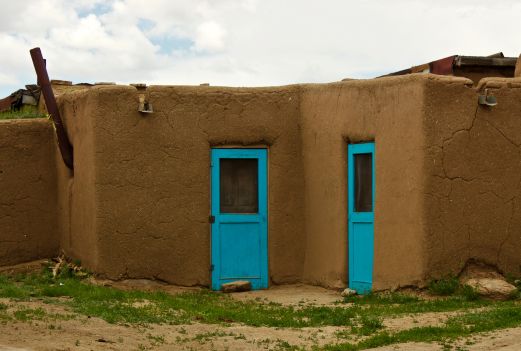 In about 1619 the first Spanish-Franciscan mission was built by priests with Indian labor and called San Geronimo de Taos. The original was destroyed when the Indians rebelled against the Spanish and was later rebuilt in the mis 1800’s. Ninety percent of the Taos Pueblans are practicing Catholics but still retain a lot of their ancient rites which they integrate into religious ceremonies throughout the year.

Like a lot of the other pueblos found in New Mexico, the preservation of the culture of Native Americans who lived in them is remarkable, and their history is a vital part of our heritage. A must visit site!

One of the nights when we were at Robert and Ingrid’s we settled down to some vodka and red wine while I made some penne from a recipe that has been cooked a ton of times in our family. The trattoria Alla Vechia Bettola is a 15 minute walk from downtown Florence Italy and is a beacon for traditional Tuscan cooking. While you will find tourists there, it is mostly supported by locals and for good reason. While any and all of the dishes you find there are great, one of the more famous recipes is Penne Alla Vecchia Bettolla, or as a lot of Americans know it Penne in Vodka Sauce.When Elly and E.J were visiting a couple of years ago before moving to China we made it, with E.J loving helping me hand crush the tomatoes. This is the authentic one. Enjoy!!