We hit the Marine Corps Air show in Beaufort SC on a warm and partly sunny day and were treated to hours of planes roaring through the skies at each other, flying inverted and standing still at 500 feet. If you have ever been to an air show you know the rush you get when these pilots do their tricks, the awe you feel as these men and women risk their lives at incredible speeds and in seemingly impossible maneuvers. The main attraction of course was the Blue Angel Demonstration Team, but there were a lot of other eye-popping and jaw dropping acts as well. Because a lot of this technical stuff is way out of my pay grade I’ve borrowed from the internet to accurately describe these aircraft and their capabilities. The pictures are mine.

From the website, the AV-8B Harrier II was the U.S. military’s only short takeoff, vertical landing jet aircraft in inventory. Originally flown in the late 1960s, the Harrier has undergone a series of improvements that have increased safety, range and lethality. The AV-8B is a key component of the Marine Corps’ “all STOVL force” concept, allowing Marines to be supported in austere conditions in expeditionary environments.

From the website, the F-35B short takeoff/vertical landing (STOVL) variant is the world’s first supersonic STOVL stealth aircraft. It is designed to operate from austere bases and a range of air-capable ships near front-line combat zones. It can also take off and land conventionally from longer runways on major bases. It replaced the AV-8B Harrier.

From the Gary Ward website; Gary started flying airshows in 1998 in a Pitts S2-B and then flew airshows in the Giles 202 from 1999 through 2005. In 2006 he became the first pilot to fly airshows in the awesome and exciting new MX2! The MX2 is an all carbon fiber monoplane powered by a 6 cylinder Lycoming engine “pumped up” by Lycon and is truly “state of the art” in all out aerobatic aircraft.

From the website, RedLine Airshows is a dynamic 2-ship formation aerobatic performance team. The opposing, inverted and formation maneuvers are a crowd pleaser. Pilots Ken and Jon fly Van’s RV-8s, a 2 seat, tandem aircraft capable of speeds up to 230 miles per hour! Ken and Jon both reside in Cincinnati and keep their airplanes in adjoining hangars. They have been flying formation together for more than 10 years.

From Wikipedia, the CH-53E can transport up to 55 troops or 30,000 lb (13,610 kg) of cargo and can carry external slung loads up to 36,000 lb (16,330 kg).The Super Stallion has a cruise speed of 173 mph (278 km/h) and a range of 621 miles (1,000 km).The helicopter is fitted with a forward extendable in-flight refueling probe and it can also hoist hose refuel from a surface ship while in hover mode. It can carry three machine guns: one at the starboard side crew door; one at the port window, just behind the copilot; and one at the tail ramp. The CH-53E also has chafe-flare dispensers. 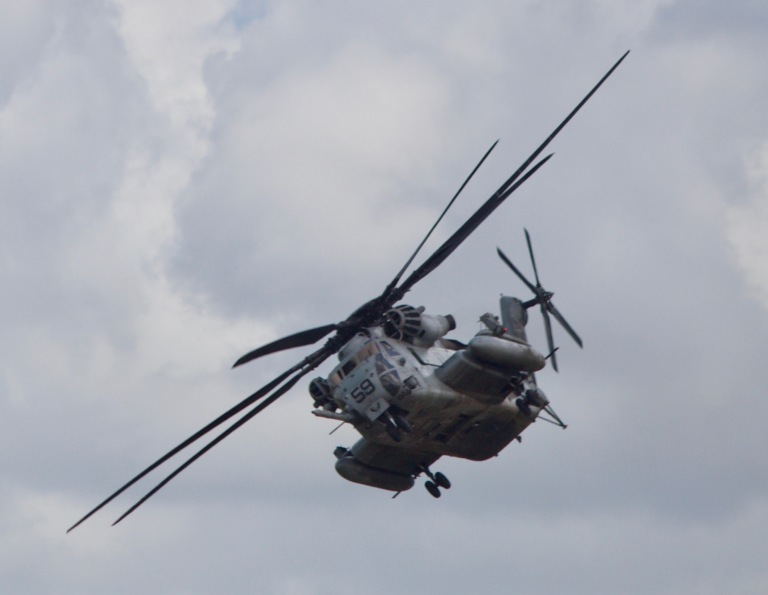 From a brief by the Air Force, the Air Force F-16 Fighting Falcons are no strangers to combat, having conducted, as of last year, well over half of all coalition sorties against the Islamic State in Iraq and Syria.

But just a few of the aircraft — three squadrons’ worth, to be precise, carry an additional mission: hunt and destroy surface-to-air missile sites, tracking them via their radiation signature and even using the aircraft as nimble bait.

The mission, known as the “Wild Weasels,” dates back to Vietnam, said Capt. “Battle Ship,” a pilot with the 480th Fighter Squadron out of Spangdahlem Air Base, Germany, who asked to be identified by his call sign.

From the website the World Famous GEICO Skytypers Airshow Team is a flight squadron of six vintage WWII aircraft performing precision flight maneuvers at select airshows across the US. The diverse flying expertise of the team members aligns perfectly with the unique components of their overall performance.

The best of course was saved for last – the Blue Angels – the United States’s Navy flight demonstration squadron made up of officers from the Navy and the Marines. Begun in 1946, they have progressed through a series of home bases and aircraft and are now stationed in Pensacola Florida and fly six F/A-18 Hornet aircraft, split into the Diamond Formation (Blue Angels 1 through 4) and the Lead and Opposing Solos (Blue Angels 5 and 6). Most of the show alternates between maneuvers performed by the Diamond Formation and those performed by the Solos. Terrifyingly close flying with split second coordination is almost always a description of the type of maneuvers the Diamond Formation and the Solos perform and I was fortunate enough to catch some of the close formations and how the “blues” performed the high-speed low-altitude maneuvers that are the hallmark of the Blue Angels. 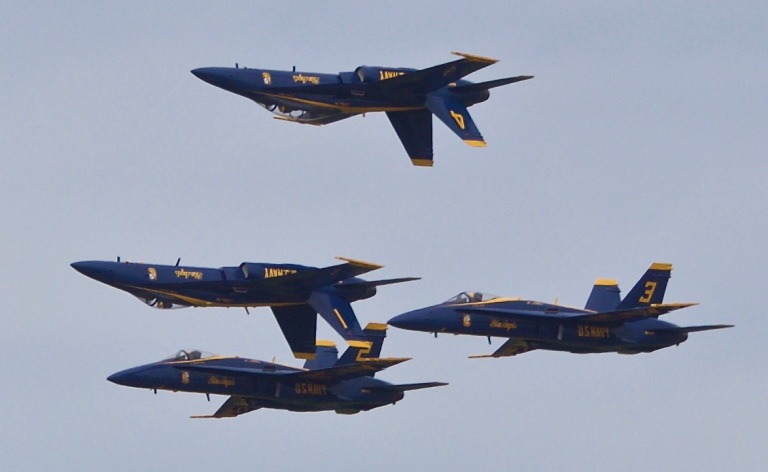 I would think the eye/hand coordination of a baseball hitter facing a 100+MPH baseball doesn’t come close to the concentration required to fly these “birds”. And the oohs and ahhs from the crowd added to the tension and the excitement. Pretty incredible.

So I tried to think of something in a form of a food recipe to put in here but Maverick didn’t do much eating. He and his fly-mates did however drink at times and here is cocktail Top Gun-themed menu from Franklin Mortgage of all people.

HIGHWAY TO THE DANGER ZONE: An Evening of Top Gun cocktails.

You’ve Lost That Loving Feeling
A shot and a beer